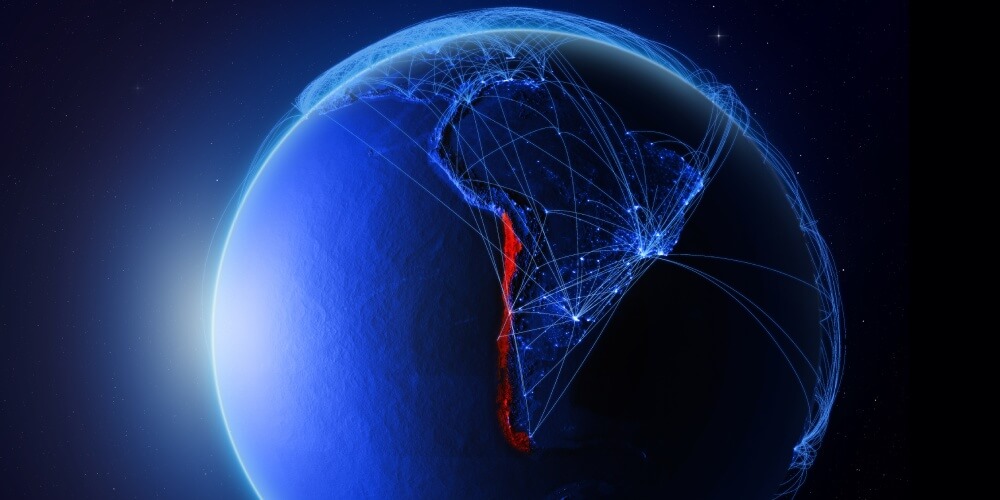 At the plenary session of the VI International InvestChile Forum 2022, a live audience of more than 400 attendees and 35,000-plus virtual ones had the opportunity to hear an analysis of the international economic scenario from the OECD’s Chief Economist and Director of Country Studies, Álvaro Santos Pereira and the United States Department of State’s Chief Economist, Emily Blanchard, while Chile’s Finance Minister, Mario Marcel, spoke about local economic challenges and perspectives.

The US Department of State’s Chief Economist Emily Blanchard referred to public policy challenges and opportunities in the post-Covid scenario, offering two observations: The first was that in the modern economy, products and services will continue to be produced in different parts of the world. The second was that today, more than ever, market stakeholders are concerned not only with what they produce, but also with how they produce it, and the impact it has.

«This challenges policymakers to respond to the private sector’s call to create a supportive environment that allows companies to do business in a different way, designed for the future», affirmed Blanchard. «Economies around the globe will be able to reap enormous benefits. Companies and investors who do business differently, more ecologically, more sustainably, more inclusively and more securely will make extraordinary gains,» she added.

To achieve this, «public-private partnerships are absolutely essential for creating this new policy environment for the future. What is most important is that governments work hand in hand with their private sectors, like we are seeing so fruitfully here in Chile,» she highlighted.

The economist also noted that, since goods and services are produced at the global level, public-private coordination «must be international», and be calculated to «preserve and expand collective prosperity and well being through solid, diverse global supply chains that will be centered on reliable cross-border partners and, once again, here Chile has an incredibly important role to play in the global economy».

Ms. Blanchard also stressed that «in recent decades, Chile has demonstrated and earned its solid international reputation by having competent, consistent, efficient and transparent institutional management of its economy,» which, when added to «its geographic location, abundant natural resources, unique topography with a lot of solar and wind power and talented workers, makes Chile an ideal place to develop a series of sectors that are important for the future global economy, particularly in renewable, solar, wind and green hydrogen energy.»

«I am especially pleased to applaud and praise the incredibly thrilling progressive steps that are being taken here in Chile, not only to take advantage of investment opportunities, but also to fight economic and gender inequality. This is difficult, but crucial,» the economist pointed out.

Chile in the global context: Challenges and Opportunities

Álvaro Santos Pereira, the OECD’s Chief Economist and Director of Country Studies, offered his organization’s vision of the global economy, the region and Chile. He also commented on the challenges that this panorama presents for both domestic and foreign investment in our country.

Among the factors that are currently stressing the global economy, he mentioned the war in the Ukraine, which has resulted in one of the greatest energy crises in recent decades. This situation keeps the economy lagging, with expected growth for 2023 around 2.1% and closer to 3% in 2024. That is accompanied by very high inflation, which limits purchasing power and will remain high in the coming year and will only begin to drop in 2024.

Risks to the global economy

Addressing risks, the economist referred to the Northern Hemisphere’s energy crisis, which will continue to increase gas market prices and fertilizer prices and exert more pressure on inflation. Added to this is the risk of new Covid quarantines in China, a country that recorded its lowest growth since the 1970s.

Santos Pereira also believes there are risks in the housing market, given the high cost of debt financing, which has made variable rate mortgages more expensive and discouraged corporate investment. «Close to 60% of the world’s poorest countries are at risk of a debt crisis. The even stronger dollar and rising interest rates will put even more pressure on the poorest countries, and that is something that worries us considerably,» commented the economist.

To address this scenario, the OECD recommends that countries maintain a restrictive monetary policy until inflation is under control. As for fiscal policy, «remain prudent, as Chile is doing, and doing very well.” In this regard, the economist mentioned government aid packages for individuals and companies, but warned that they would not be enough to absorb the impact of the energy crisis, which is expected to last three to five years.

Because of this, Mr. Santos Pereira called for measures that are «more targeted and temporary» and noted that «investing in energy security means investing in the green transition,” highlighting that both President Boric and his ministers have been emphatic on this point. «That is why Chile’s leadership is important,» he affirmed.

«In Chile, the coming quarters are going to be difficult, which is already happening and more in other countries, but we see a lengthy recovery after mid-year and, certainly, a strong recovery in 2024, and that recovery is going to be much more robust than in other Latin American countries,» he said.

The economist also noted that the inflation forecast for Chile is lower than in other countries in the region, and the OECD expects that in 2024 it will be «very close to the target range.» The expert’s recommendation is to take measures to «lower entry barriers and increase competition, which will help to lower prices and costs.»

«Chile is one of the countries that receives the most foreign investment, because it is a very attractive country,” affirmed Santos Pereira, stating that «the longstanding strength of this country’s institutions and its reformist attitude are very important for attracting foreign investment.»

To continue being attractive, he explained, Chile must keep working on issues such as simplifying regulations and permits, working on entry barriers to some sectors and entry barriers to entrepreneurship, investing in Research and Development and in renewable energies, working to bring more investment to its regions and improving regulations that affect international trade and investment.

«Chile is going to be central in several areas in the coming years. Not only in green hydrogen, but also in critical raw materials that are going to be absolutely essential,» he affirmed. «Moving up the value chain here in Chile to take advantage of these critical raw materials is important, as is enhancing its energy grids. There has to be a lot of investment here to make the green transition,» argued the OECD economist.

In closing, Santos Pereira highlighted that Chile has had a reformist attitude for many years, an ongoing drive to improve. «A reformist country is a country that needs and is going to have more and more investment. I invite both Chileans and foreigners to look at Chile, because I think it is worth investing in Chile and I have no doubt that the future of Chile is going to be brighter and brighter,» he concluded.

Optimism for the Chilean economy

Chilean Finance Minister and former President of the Central Bank of Chile, Mario Marcel, emphasized the resilience of the Chilean economy. «While we had rather negative expectations for investment, this year is going to end with moderate growth. For 2022, a drop of around 3% was forecast, and we are going to grow by 3%,» he indicated.

Furthermore, the minister recognized that, even though 2023 will still be a challenging year for Chile, it is now possible to see the light at the end of the tunnel. «Just because we see negative figures in 2023, does not mean the recession will worsen. What that means is that the economy will have cooled down enough that, from that relatively low point, we will begin to recover,» affirmed Minister Marcel.

On the topic of foreign investment, the minister commented that, «in addition to the opportunities that are opening up in energy and in resources for the transition to a green economy, there are also advances in the digital economy. And that is helping to moderate the drop in investment expected for this year.»

«We are making a transition on many planes: the macro, the productive and the political. If we manage to complete them successfully, we will enter into a much more promising stage for our economy and for the country’s welfare,» added the minister.

Future-oriented solutions: 4 companies that decided to invest in Chile