New Venture Capital projects in Chile potentially worth US$125 million

InvestChile has a portfolio of 26 projects at various stages of development, from planning to implementation. 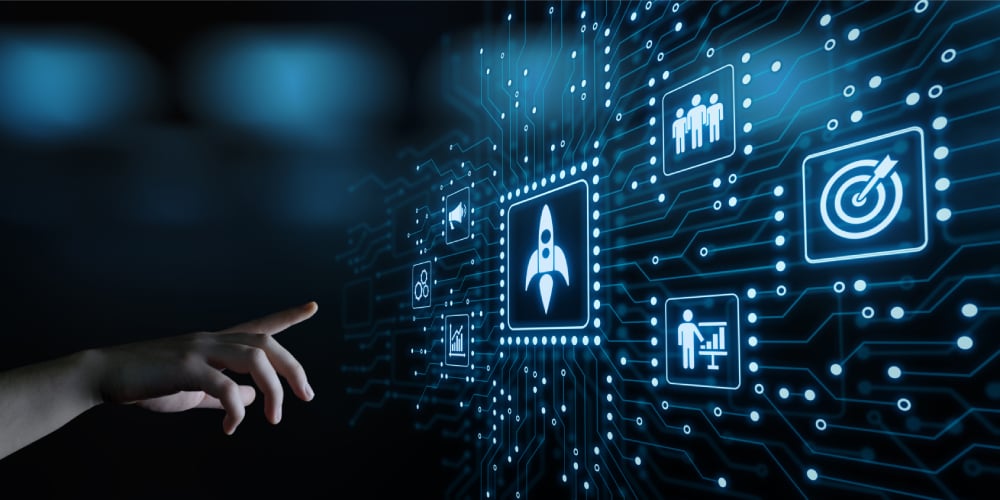 Mining, food, energy and tourism are the industries that have traditionally attracted foreign investment to Chile. However, a new industry has recently joined that list: Venture Capital (VC) and, due to the growth of this industry around the world in recent years, it has now captured the attention of InvestChile. According to the Chilean Association of Investment Fund Administrators (ACAFI), investment in Venture Capital projects totalled US$17 million in the first half of 2020, more than half of the total amount invested in the whole of 2019.

“At InvestChile, our role is to attract new investors to the market in order to diversify the range of industries in Chile. Venture capital has an important role to play in this regard, because it not only provides capital to Chilean companies, but also channels it towards those that are innovative, scalable and able to access global markets. Although we had previously mapped out several funds that were operating in Chile, we didn’t have a proactive approach,” explains Beatriz Herrera, International Network Coordinator and Venture Capital Investment Promotion Officer at InvestChile. She adds that three out of every four financial projects in the InvestChile portfolio are now Venture Capital. 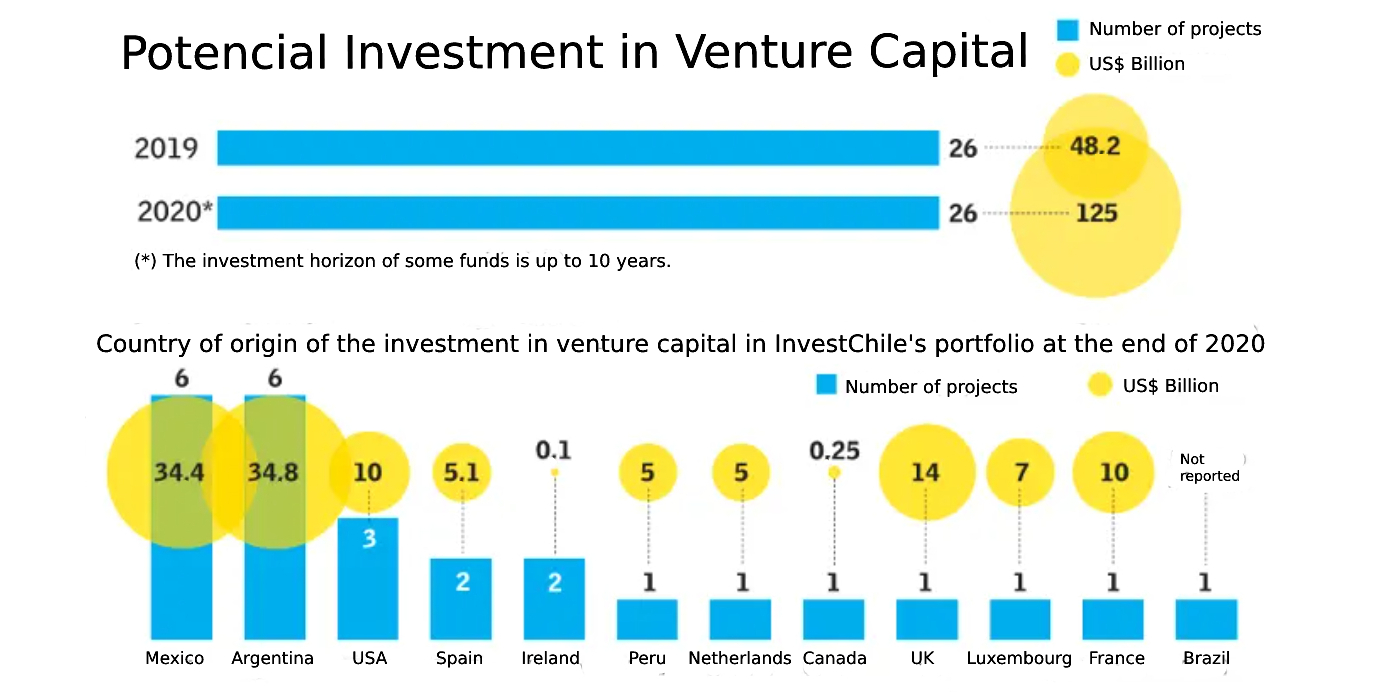 Ms. Herrera describes how InvestChile decided to formalize a Venture Capital strategy and commercial plan towards the end of 2018, after carrying out an analysis of the industry with local organizations, such as the Chilean Venture Capital Association (ACVC). The plan is now showing results: by the end of 2020, InvestChile had leveraged US$125 million in potential investment for 26 projects at various stages of development, from planning to implementation. This represents a 159% increase compared to the prior year, in which US$48.2 million was invested.

The benefits of foreign investment in Chile

One of the pillars of InvestChile’s strategy is to attract and secure Venture Capital fund investments that possess two fundamental characteristics:

“There is a shortfall in investment in Chile that foreign finance can help to cover. It can also prevent start-ups from having to leave the country when they need higher levels of investment,” Ms. Herrera explained.

The strategy has been viewed positively by the experts. “We love what InvestChile is doing… the local market isn’t developed enough at the moment to raise larger amounts; it can be quite difficult. International investors are able to cover this shortfall,” says Francisco Guzmán, President of ACVA. Sofía Grez, Chief Financial Officer at ChileGlobal Ventures, the Venture Capital division of Fundación Chile, adds, “if we can attract foreign investors from developed countries who have experience in the industry, we will be able to mobilize more private capital and turn Chile into the Latin American hub for Venture Capital investment.”

InvestChile has a portfolio of around 50 clients with links to the Venture Capital industry, for example, Venture Capital associations from other countries and business accelerators. Herrera explains that these clients are mainly from other Latin American countries (like Mexico and Argentina) and are looking to invest in start-ups with B2B business models.

When discussing the work that has been carried out with clients in their portfolio, Herrera explains that InvestChile essentially connects and engages investors with the local ecosystem. For instance, meetings can be set up through ACVA or specific associations, such as FinteChile, so that investors can learn about the local financial panorama. She goes on to state that InvestChile has three main objectives: to secure foreign investment in local businesses; to get Venture Capital funds to set up in Chile and provide finance from there; and to procure investment in Chilean ventures.

Herrera explains that around 30% of InvestChile’s portfolio has achieved at least one of these three objectives. She also reveals that this year two new Venture Capital projects from the United States have been added to the portfolio, totalling US$8.5 million.

“Investors are motivated by regulatory issues and Chile has a good reputation in terms of reliability. Our business environment is well-known, with good connectivity and good ecosystems for generating talent. Plus, we have the added advantage that our start-ups may require a lower value than those in the United States or Europe yet offer the same level of potential. This means that a fund can invest a slightly lower amount and still receive similar returns on its investment,” Herrera notes.

Meanwhile, Antonia Rojas, Partner with the Mexican-based ALLVP fund that is currently working with InvestChile, says, “foreign investors are unaware of the benefits of investing in Chile and its market strengths. InvestChile is helping to coordinate a specific strategy for the country.”

The Yield Lab and Oxbridge Capital Partners touch down in Chile

One of the initiatives in which InvestChile has actively participated is the opening of The Yield Lab fund’s office in Rancagua. The United States-based fund focuses on agricultural technology and has been operating in Latin America since 2017, specifically in Brazil and Argentina.

Tomás Peña, Managing Director of The Yield Lab Latam, explained that the fund began talking to InvestChile in 2019. These talks finally led them to open their first office and the Yield Lab has already invested in the Chilean companies PolyNatural and Botanical Solutions. “InvestChile called us, because Chile’s Economic Development Agency (CORFO) and the O’Higgins Regional Government were holding a tender to help funds get set up in Chile. They supported us and then gave us the OK. Our aim is to bring the fund closer to agricultural producers,” said Peña. The Yield Lab’s current investment vehicle is worth US$5 million, in a portfolio of 14 start-ups. By 2021, they hope to have invested in five more and have raised a new US$50 million fund.

Another initiative saw the arrival in Chile of the first British-based fund, Oxbridge Capital Partners (OCP). This year it became the main investor in a second fund managed by the Chilean Venture Capital firm, Genesis Ventures. Guillermo Ramírez, Managing Partner of OCP for Latin America, explains that they are currently working with InvestChile to set up meetings with stakeholders in the global ecosystem. “InvestChile sets up and carries out network management. We’ve had meetings with the heads of English companies that want to co-invest,” Mr. Ramírez states.

Rojas adds that, although ALLVP had already been investing in Chile prior to working with InvestChile, the agency is now helping them “to get closer to the Chilean market, to understand its strengths, to get to know which industries are better developed, and to familiarize ourselves with its free trade agreements, its connections with other countries, its different sectors and its opportunities.”

Herrera adds that they have started to receive more interest from European and Asian investment vehicles. In order to gain greater traction in these markets and to continue working with countries that have already shown an interest, last year InvestChile decided to put together its first report on the local Venture Capital industry. The eBook that has been published describes Chile’s panorama and the main actors that make up the country’s Venture Capital sector. The eBook can be downloaded here.